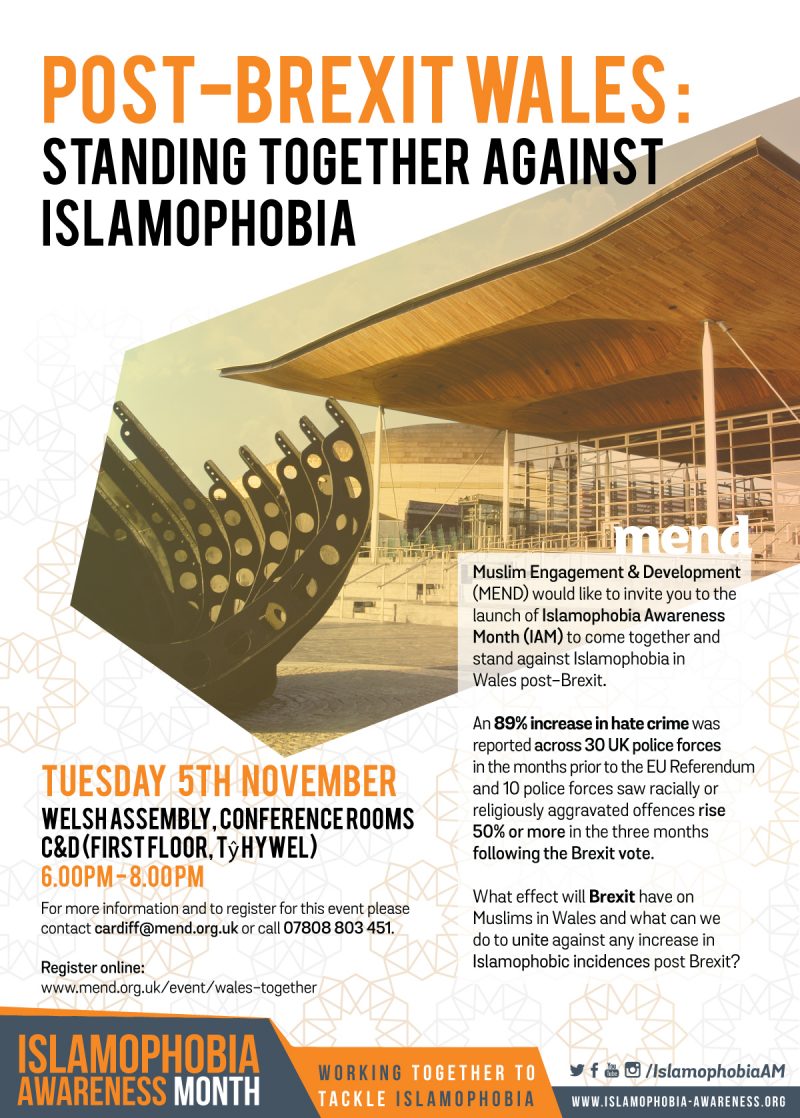 Muslim Engagement & Development (MEND) would like to invite you to the launch of Islamophobia Awareness Month (IAM) to come together and stand against Islamophobia in Wales post-Brexit.

An 89% increase in hate crime was reported across 30 UK police forces in months before the EU Referendum and 10 police forces saw racially or religiously aggravated offences rise 50% or more in the three months following the Brexit vote.

What effect will Brexit have on Muslims in Wales and what can we do to unite against any increase in Islamophobic incidences post-Brexit?

This event is sponsored by Leanne Wood (AM).

On 6th of June 2020, Cardiff witnessed its biggest protest

Approximately around 2000 people came out in support of the Black Lives Matter (BLM) movement that is currently highlighting systemic and institutional racism in the UK and the US. The protest was organised by a group of six ladies, each having had their own unique part to play as the day unfolded....

The MEND Leicester team have developed a video to present the amazing work being done by the wider Muslim Community in Leicester during the Lockdown. The short video showcases Leicester’s Muslim Community working to serve the city and beyond during COVID-19.  The kinship, kindness and the...

Birmingham Central Masjid and MEND volunteers have launched the Phone A friend Listening Service to help people with mild anxiety symptoms related to the Covid-19 situation and lockdown. There will be a separate phone line for brothers and sisters. Please do share the below details to anyone...

25 years on from Europe’s largest genocide since world war II, where over 8,000 Muslim men and boys were murdered, we heard from: Hasan Hasanovic, genocide survivor and acclaimed author who spoke of his lived experience of the genocide in Srebrenica and the loss of his twin brother and father in...

Midland Masjids say Thank You to the NHS

MEND volunteers from across the Midlands region worked with their local masjids to show their solidarity, support and gratitude towards the NHS workers and keyworkers, that are currently working tirelessly to protect the community. NHS banners went up across the region not only saying thank you to...

Black Lives Matter: Disproportionate Impact of Covid-19 Rousing a Proportionate Response?    The past month we have seen protests in the US and beyond. The murder of the black American citizen George Floyd, caused the outcry for justice as protests spread across the  globe. As it woke the hearts...

MEND Scotland held its first new volunteer induction session in Falkirk this week. We had five new volunteers in attendance who are all ready to get MEND established in Scotland’s central belt. It all started just before we went in to lockdown, when a young woman from Falkirk contacted our team...

Yorkshire Mosques give their thanks to the NHS!

Mosques in Yorkshire have joined others around the country in expressing their gratitude and appreciation of the NHS using blue banners. The banners read “THANK YOU! To all the dedicated frontline staff & key workers for your service!” followed by verse 32 from chapter 5 of the Qur’an...

MEND Sheffield Collaborates with Stand Up to Racism Sheffield

Last week our Sheffield Working Group co-organised with Stand Up to Racism Sheffield and a number of other organisations to hold an open meeting with the topic of Decolonising Education. A number of speakers participated in the event, including: Saleem Rashid of the National Education Union;...