MEND urges the UK Government to adopt the definition of Islamophobia produced by the APPG for British Muslims: “Islamophobia is rooted in racism and is a type of racism that targets expressions of Muslimness or perceived Muslimness” and apply this definition in conjunction with the guidelines outlined within our Manifesto (see p17-18). There is also a need to tackle inadequate legislation on racial and religious hate crime and similar Islamophobic hate speech on social media.

Islamophobia in the education system impacts Muslim children and their development in a wide variety of ways. From being bullied explicitly regarding their faith, to being stigmatised and reported to the PREVENT strategy for views they may hold, and to being interminably questioned on their apparent divergence from (thus far ill-defined) “British Values”, Muslim children are struggling to navigate this complex maze. Meanwhile, controversies such as the alleged “Trojan Horse” affair and Amanda Spielman’s proposals as Chief Inspector of Ofsted to question schoolgirls who wear the hijab highlight the obsessive scrutiny and problematisation of Muslims within the sphere of education.

Studies have shown that Muslims encounter discrimination at all levels of recruitment, retainment and progression; face high levels of unemployment; and are disproportionately confined to unskilled professions or jobs with limited opportunities for progression.[1] The Government’s Social Mobility Commission cited a number of barriers to success for Muslims in the employment sphere, including ethnic minority sounding names being less likely to be offered interviews and Muslims feeling forced to work “10 times as hard” as their white counterparts in order to achieve equivalent levels of success.[2] Meanwhile, Muslim women face a triple penalty in the employment sphere due to being women, being from an ethnic minority background, and for being Muslim.

Commit to supporting employers to recognise and accommodate religious festivals and religious observance within the workplace, including the provision of halal meat, prayer rooms, and flexible work hours during Ramadan.

Studies have also shown that, with 21 negative references to Muslims within the British press for every single neutral or positive reference,[1] the media plays an integral role in spreading prejudice, stereotypes, and xenophobic views of British Muslims. This, in turn, directly contributes to hate crime, discrimination, and marginalisation of Muslim communities.

Meanwhile, the failures of the current regulator, IPSO, and the Government’s continued failure to fully implement the Royal Charter on Press Regulation leaves little recourse for tackling Islamophobia in the mainstream press. At the same time, the lack of diversity within broadcasting and the continued confinement of Muslim actors and characters to stereotypical roles and representations is an issue in need of redress. Therefore, the broadcasting industry needs to be supported in devising initiatives to promote positive portrayals of Muslims.

MEND calls on political parties to commit to independently reviewing all counter-terrorism legislation enacted since 2000 with a view to curbing the encroachment of counter-terrorism policies on civil liberties. MEND is of the firm belief that the PREVENT duty should be repealed and welcomes the independent review of PREVENT as a crucial first step in tackling the detrimental impact of ill-conceived counter-terror strategies on Muslims’ abilities to fully enjoy their social, civic, religious, political, and economic rights. However, there are signs that this review may not be truly independent nor wide enough in its scope to examine all of the factors that may lead someone to be drawn into acts of politically motivated violence, including the role of foreign policy in such a trajectory. It is interesting to note that, with the announcement of Lord Carlile as the Independent Reviewer, questions have already been raised about his own independence, given his previous support for PREVENT.[1]

While data shows a growing trend of Muslim engagement in the field of politics, there remain significant challenges Muslims face when operating within the political sphere. Ultimately, political parties must address structural barriers that exclude Muslims and other minority groups. Meanwhile, studies have identified PREVENT as contributing towards a deficit in civic engagement amongst Muslim students; impacting their ability to engage in certain discussions and deterring them from running for elected positions.[1] Furthermore, as recommended by the 2017 Citizens UK report, Missing Muslims, the Government must mend its “broken relationship”[2] with Muslim communities by reconsidering its policy of disengagement with credible mainstream Muslim organisations that have the trust and support of British Muslim communities.

[1] “Our Research into the Experiences of #MuslimsInEducation” NUS Connect, March 18, 2018, https://www.nusconnect.org.uk/articles/our-research-into-the-experiences-of-muslimsineducation.

[2] Citizens UK, The Missing Muslims: Unlocking British Muslim Potential For The Benefit Of All, 2017, accessed 05.09.2019, https://www.barrowcadbury.org.uk/wp-content/uploads/2017/07/Missing_Muslims_Report_-full-report.pdf

Despite the protections afforded by the ICCPR, the ECHR, and the Human Rights Act, recent years have witnessed public debates that have challenged Muslim religious practice and observance in the UK. Particular public controversy has surrounded the right to halal meat, the building of mosques, the right to access Shariah councils, and the right to religious dress. Such debates also demonstrate how discourse around issues of religious rights can be used as a proxy argument to marginalise minority communities and Muslims specifically. With continued Brexit uncertainty, it is essential that Human Rights are protected as they are currently enshrined within UK legislation. 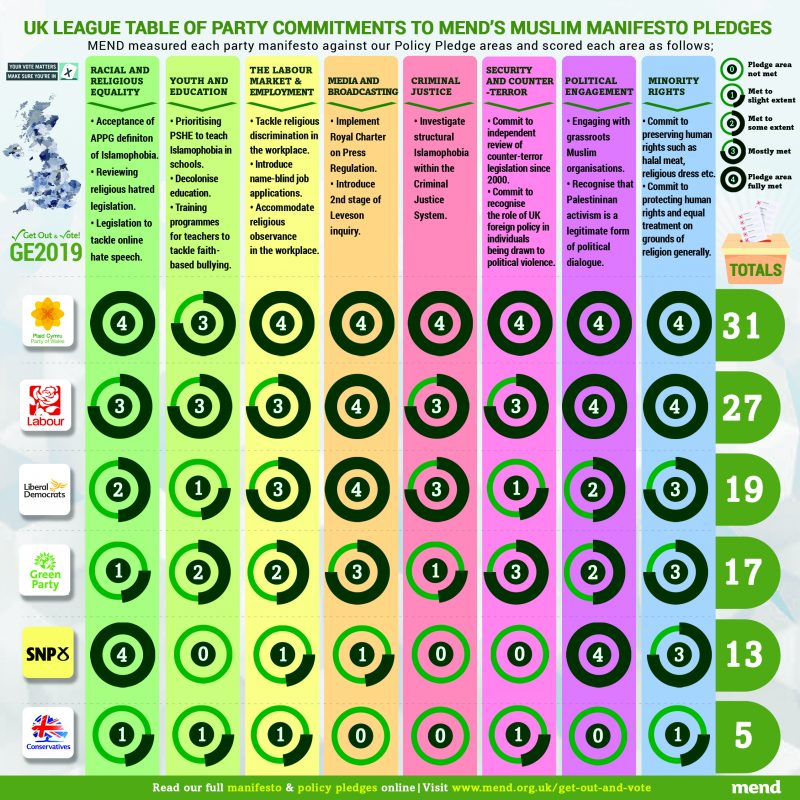