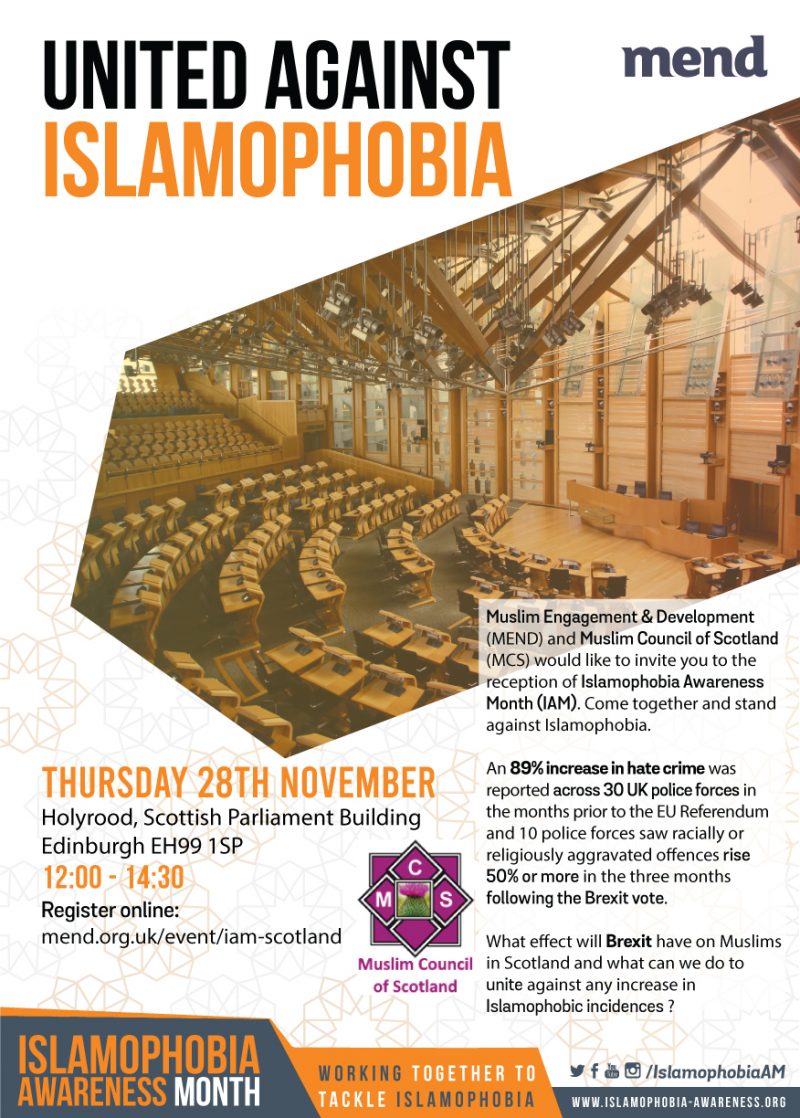 Muslim Engagement & Development (MEND) and Muslim Council of Scotland (MCS) would like to invite you to the reception of Islamophobia Awareness Month (IAM). Come together and stand against Islamophobia.

An 89% increase in hate crime was reported across 30 UK police forces in the months prior to the EU Referendum and 10 police forces saw racially or religiously aggravated offences rise 50% or more in the three months following the Brexit vote.

What effect will Brexit have on Muslims in Scotland and what can we do to unite against any increase in
Islamophobic incidences ?

MEND Islamophobia exhibition was displayed at Swansea Waterfront Museum as part of hate crime week organised by Swansea City Council and victim support. The exhibition explores the history of Muslims in Britain by looking at how Muslims migrated and how they contributed and are still contributing...

Islamophobia is a unique form of Gendered Violence. 60% of MEND Islamophobia Response Unit (IRU) hate crime reports come from Muslim women. The number rises to 80% when just looking at physical assaults. Usually, these attacks on individuals have ripple effects within the family and wider...

On Thursday 7th November, the Riz Test team brought their workshop to Manchester Museum as part of Islamophobia Awareness Month. Under a glorious T-Rex, the founders of the test spoke about the academic theory behind it, some real life examples and, introduced high school students who had done...

United We Rose On a cold, Saturday morning in November the Leicester Mend team kicked off Islamophobia Awareness Month with a heartwarming gesture to the local community, ‘United we Rose’. Three hundred roses were distributed along with messages paraphrased from prophetic sayings and...

Wednesday 6th November 2019 was the hugely successful launch of Birmingham’s MEND Islamophobia Awareness Month (IAM). With many guests attending, a range of speakers emphasised the importance of recognising Islamophobia in our society and MEND’s contribution to tackling this. The evening began...

8th November, 2019, saw a wonderful, diverse gathering for MEND’s Interfaith event ‘Religiophobia’. As part of Islamophobia Awareness Month, MEND reached out to those of faith and none, to discuss ways in which we can promote tolerance and respect in today’s society. The theme...

In a prayer room at Darul Uloom Leicester, on the 15th November, senior students and teachers gathered for an engaging presentation on Islamophobia: Causes and Cures. Throughout the event questions were raised and discussions held on solutions to tackling Islamophobia and what could be done to...

WOW – Good food, great speech, amazing people! We recently had a professionals dinner in Bristol. Alhamdo-lillah it was a great success. Over 50 people attended, medical professionals, lawyers, entrepreneurs, local Councillors and community leaders. First time in Bristol that an event for...

Speaking at the Enrichment Week of Andalusia School, Bristol

The regional manger of MEND in South Wales, Sahar Al-Faifi was invited to speak at Andalusia School on the 17th of July as part of their enrichment week. Sahar spoke about her experience growing up as a Muslim and the challenges she faced in the education system. She also shared practical tips on...