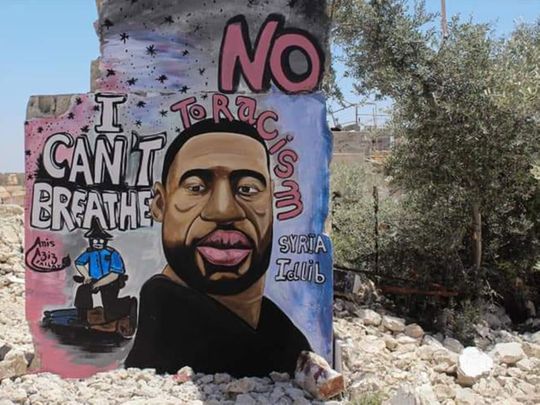 Amina Shareef from our Sheffield Working Group recently spoke at an online rally for the Black Lives Matter movement hosted by Stand Up To Racism Sheffield. The event was organised to show solidarity with those protesting police brutality in the US, as well as in the UK.

In her speech, Amina discussed a mural of George Floyd by Syrian artist Amir Aziz to draw out transnational struggles against oppression:

This image on the last standing wall of a Syrian street exposes the transnational significance and symbolism of “I can’t breathe.” This image prods us into acknowledging that “I can’t breathe” captures more than just the cry of anguish suppressed too long and now released by a people brutally enslaved, exploited, and expelled into the rotten margins and dead-end ghettos of modern American life.  Indeed, this image narrates a story of displacement, dehumanisation, and immiseration of a planetary dimension, enduring through and created anew by historical and modern forms of imperialism and colonialisation.

“I can’t breathe” is an Islamic intellectual, silenced by the accusations of rape, taken as political prisoner to politically suffocate a Muslim spiritual revival. “I can’t breathe” are the floating bodies who lungs carry the waters of the Mediterranean, bodies only naturally fleeing the armed conflicts and economic famines of our manufacture.

IAM2020: Causes and Cures of Islamophobia Presentation at Aston University