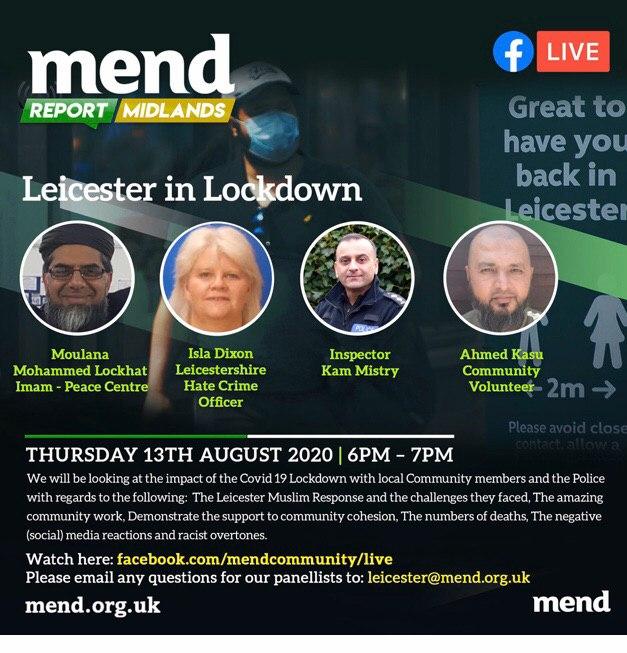 Our MEND report Midlands took place Live on Facebook, 13th August 2020. The show looked at how the local community had responded to the lockdown in Leicester and discussed the multitude of challenges they faced. Hosted by, one of our newer volunteers, Nisar Navsariwala, joined by 4 fantastic guests:

The show was a real insight into all the amazing work the community have undertaken. Ahmed Kasu, who can best be described as a community champion, spoke in-depth about the multitude of individuals and organisations that got together even before the official lockdown to create a strategy to assist the community. This involved helping the most vulnerable in society from the elderly to the youth. He also spoke about how over 100 volunteers were organised to partake in funeral rituals even before a single death in the City had been registered. The awareness, unity, and implementation of strategy by the community was truly remarkable.

One common theme of the programme was the discussion surrounding the negative media, both social and print, against the Muslim community. This ranged from subliminal photos of Muslims when reporting on lockdown stories to the more overt blaming of the Muslim community for localised spikes. Police Commander and Inspector Mistry explained the importance of encouraging, explaining and enforcing positivity to counterbalance the negativity. He was asked how this negativity against a community affected policing and how and what we can do to challenge this (false) narrative. His response was to continue engaging with the community.

We were also extremely privileged to be joined on the show by, the Imam of the Peace Centre, Maulana Mohammed Lockhat. He explained how his centre had been a hub during the lockdown in providing food and necessities to people all over the country. His enduring message was that of the importance of the youth to the community. He reiterated what his fellow guest Ahmed Kasu had said of depositing responsibility on the young and the eager and   utilising all the talent that is available to the community. Maulana Lockhat explained the hardships of extended lockdown and how a Masjid in a predominately non-Muslim area was immediately transformed into a food distribution centre.

Isla Dixon, who is Leicestershire police’s lead Hate Crime officer, was at hand to really explain what constitutes a Hate crime and what one should do if they happen to be a victim of such a crime. She acknowledged, that Islamophobia was a real issue and unfortunately one that Muslim women were more likely to be victims of. Her most poignant statement was that to tackle hate crime it needs to be reported.

Overall, it was an insightful show that highlighted some of the amazing work that was done by the Muslim population of Leicester. It touched upon the role both the community and the police must play in challenging the negativity surrounding Muslims, especially in certain media outlets and Far Right groups. Finally, the show ended with a message of the importance of unity and entrusting our future generation with responsibility who are more than capable of serving the community.