Home » News » The Scapegoating of Muslims During a Pandemic

The Scapegoating of Muslims During a Pandemic 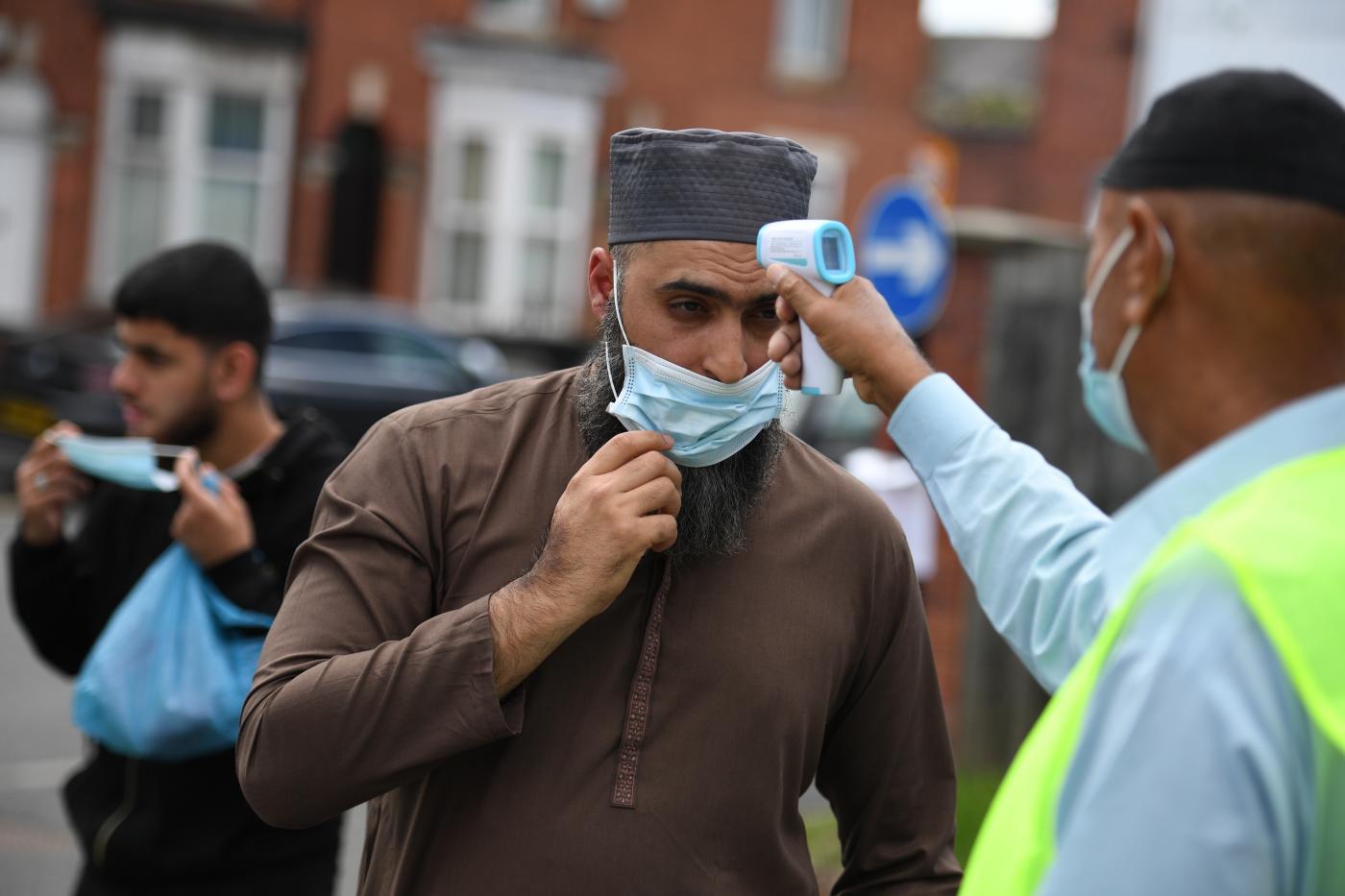 In 2017, Imam Is’Haaq Jasat’s family sat down in a park on a beautiful sunny day to enjoy a picnic celebrating Eid as part of a local community event.

At the time, a keen photographer, with permission of the family, took a photo of them to publicise the event and highlight how the local community was coming together in community spirit.

Three years later, the same photograph was used in articles addressing the COVID-19 pandemic by the BBC, Sky News, and others, without the permission of the family, and resulting in staggering amounts of Islamophobia and harassment.

The picture was shared in various articles, including in major publications such as the BBC and Sky News. The BBC article was entitled: “Coronavirus: Muslim Council urges people to avoid communal Eid celebrations”, and the Sky News article was entitled: “’Like cancelling Christmas’ – Hancock criticised for lockdown announcement before Eid”.

In the example from Sky News, the picture was used in an article discussing lockdown rules in the run-up to Eid, and how some members of the Muslim communities found the timing of the sudden announcement of restrictions (just hours before Eid) problematic. This was not the position of the Imam within the picture, nor his family. Yet far-right agitators were quick in castigating them (as well as the wider Muslim community more generally) for breaching lockdown rules.

Both articles were latched upon by far-right agitators who spewed hateful rhetoric, claiming the family was not adhering to lockdown rules and the pandemic was worsening because of Muslims.

One user said: “Do you know where you can celebrate Eid with no issues? In an Islamic country. Perhaps take your extended family and move to one. Your culture and customers are not wanted here anyway”. Another said: “Just look at those people breaking the rules. Shame on them, they are so arrogant and they spread virus like wildfire”.

Moreover, the harassment has not been restricted to cyberspace. Imam Is’Haaq told MEND that he, and his family, have received numerous threatening calls levying abuse at them for allegedly breaching lockdown rules, with agitators ignorant of the fact that the picture was three years old.

Imam Is’Haaq – a notable community leader; visiting Imam at the London Islam Cultural Society; founder and CEO of the National Huffadh Association UK; and, a member of various interfaith boards – has utilised all of his platforms over the last months to strongly advocate for all communities to respect the lockdown rules.

However, following the publication of the photo, far-right agitators wasted no time in painting the Imam as a hypocrite and a ‘fake’ community leader. The emotional trauma of the ongoing online and offline abuse has been felt by the entire family, with some family members being scared of carrying out their day-to-day activities in anticipation of potential physical repercussions.

Both the BBC and Sky News have since replaced the picture on their website and removed it from their social media pages a few days later. However, no apology has been sent to the family.

Sky News responded to the family’s complaint and claimed that they had removed it as a “gesture of goodwill”, whilst the BBC has thus far failed to respond. Both publications have also been resistant to acknowledging the use of the picture as a mistake, and are yet to apologise to the family for the emotional trauma from the abuse which has resulted.

Speaking about the experience to MEND, the family stated:

“We feel that this outdated picture has been misused in a negative context to misrepresent the positive efforts made by our family to adhere with the lockdown restrictions during the Covid-19 pandemic, also as members of the Muslim community. This has further instigated more hatred towards BAME communities at large.”

While the case may seem like a random occurrence of unintended negligence, such incidences of misrepresenting the position of members of Muslim communities are not rare.

Another case of misrepresentation due to the inappropriate use of a picture was The Time’s article entitled: ‘Female circumcision is like clipping a nail, claimed speaker’, which mischaracterised the views of Mr Sultan Choudhury, former CEO of Al Rayan Bank. The article (as viewed by non-subscribers and as a preview more widely) displayed the picture of Mr Choudhury alongside the headline which led to many assuming that Mr Choudhury himself endorsed or supported such a view.

After much resistance, and only after a defamation claim was brought against them, The Times was forced to issue a correction and an apology. The apology stated: “Any impression that those views were his was not intended. My Sultan Choudhury did not say that ‘female circumcision is like clipping a nail’”.

Unfortunately, significant damage had already been inflicted. Mr Choudhury stated: “By unjustly associating me with extremist views such as the repulsive quote on female circumcision (an illegal practice my wife deals with as part of her work as a GP) we were all devastated. As a result of that article, I suffered graphic personal abuse from all over the world, which was incredibly hurtful and upsetting to all of us”.

In an era where far-right agitators are eager to target Muslim communities, careless reporting and misrepresentation of members of the Muslim communities are highly effective in spreading Islamophobic sentiment.

International conspiracies connecting Muslims to the spread of the coronavirus continue to abound, while, groups in the UK have popularised these conspiracies on social media, with counter-terrorism police recently investigating far-right groups accused of “trying to use the coronavirus crisis to stoke anti-Muslim sentiment”. Specifically, social media sites are replete with insinuations that Muslims are flouting lockdown measures, with mosques featuring prominently in unsubstantiated claims that Muslims are continuing to hold communal gatherings. Far-right followers have been particularly eager to mobilise skewed reporting and myopic political commentating to assert these claims.

Academics from Birmingham University noted that online Islamophobic narratives throughout the pandemic have largely revolved around four key themes:

In one case, a fake video was disseminated showing multiple Muslim men praying outside a mosque with far-right commentators arguing that the video displayed Muslim communities’ “arrogance” and called for “mass deportations”.

Other examples include members of the far-right attempting to spread fake news by visiting mosques whilst pretending to be “independent journalists” in order to catch Muslims congregating.

For some, such a narrative is then given political legitimacy by comments such as those of Craig Whittaker, MP, who stated that: “if you look at the areas where we’ve seen rises and cases the vast majority – not, by any stretch of the imagination, all areas – but it is the BAME communities that are not taking it seriously enough”. He further stated that there are “sections of our community that are just not taking the pandemic seriously”. When pressed as to whether he was referring to Muslim communities, Whittaker responded: “Of course.” However, Whittaker’s claim is unfounded, prejudicial, and myopic, thus distorting the realities of the current crisis.

Another particularly illustrative example is that of the Telegraph, The Sun, and the Daily Mail all of whom ran headlines in June claiming that “half of [the] UK’s imported Covid-19 infections are from Pakistan”. This was a truly distorted piece of reporting that completely skewed the data, presumably, in order to fit a very specific editorial agenda. In reality, they were using a mere 30 cases in a period of three weeks, in comparison to an estimated  1,356 imported infections during previous months, of which the vast majority were from Spain, France, and Italy.

Needless to say, an avalanche of racist and Islamophobic abuse descended upon the UK’s minority communities, particularly in areas such as Leicester, which was experiencing a second wave of lockdown measures at the time.

At a time where lies and the truth are increasingly hard to differentiate, tangible action must be taken to address misinformation and hold the press to account for advertently or inadvertently propagating inaccurate framings about Muslim communities.

In accordance with this aim, MEND urges that parliamentarians: