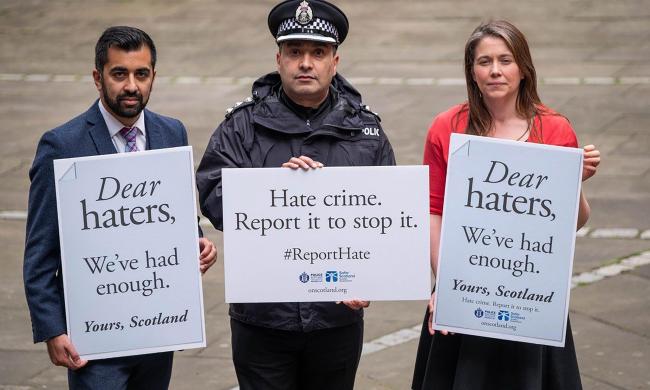 In light of rising hate crime in Scotland, the Scottish government recently announced that it is making amendments to its proposed hate crime legislation in a bid to ease concerns over its alleged impact on free speech. Initially, the bill, which was introduced in response to Lord Bracadale’s recommendations after his examination of the country’s existing hate crime legislation, stated that people could be prosecuted based upon the likelihood of a perpetrator stirring up hatred even if they did not intend to. However, the Bill will now be amended, so it only applies to people who intend to stir up hate.

Demonstrating intent has always been notoriously difficult to prove, thereby severely hampering the likelihood of successful prosecutions. As such, the proposed inclusion of proving intent will hinder rather than remedy gaps within the bill. In reality, the gap in protecting freedom of speech lies in the lack of definitions of what constitutes as various forms of hate crime, including Islamophobia.

There has been a rise in hate crime in Scotland over the last year. Figures released in June of this year by the Crown Office & Prosecutor Fiscal Service in Scotland showed how racial offences were the most commonly reported hate crime, with a total of 3,038 charges last year which equated to an increase of 4% on the previous year. Furthermore, the figures revealed that there was an increase of 24% in religiously aggravated hate crimes, indicating how religious and racial minorities are the most susceptible to the rising hate crime.

Moreover, on this matter, statistics show that Islamophobia is rising in Scotland. The Cross-Party Group (CPG) on tackling Islamophobia found concerning issues, namely that 83% of Muslims had experienced Islamophobia in Scotland, and 79% of Muslims feel Islamophobia is intensifying in Scotland. Additionally, a ComRes poll commissioned by MEND in 2018 found that nearly half of all Scottish people felt that there was more negative discrimination against Muslims than people of other faiths. Moreover, a study conducted by academics from Newcastle University and the University of St Andrews found that young Muslims in Scotland identified active engagement with Scottish electoral politics as a core form of political participation, but that everyday experiences of Islamophobia and racism were a barrier to further engagement, with Islamophobia detrimentally impacting their confidence to play a more visible role in society.

Meanwhile, despite questions regarding free speech, the bill was notably backed by organisations including the Equality Network and the Scottish Council for Jewish Communities. Indeed, like Islamophobia, incidents of Anti-Semitism have also increased in Scotland which left members of the Jewish community feeling “alienated, vulnerable and not at home” as reported by the Daily Herald. Consequently, it becomes very worrying that the bill is being amended to now only prosecute individuals who ‘intended’ to stir up hatred, which will offer a significant loophole that has already proved to have damaging consequences where it exists in English and Welsh law.

Back in the year 2013, former UKIP councillor Eric Kitson displayed a cartoon on his Facebook page of a Muslim being spit-roasted on a fire fuelled by copies of the Qur’an and in reference to Muslim women wrote, “Hang um all first then ask questions later.” However, Kitson did not face any charges for incitement to religious hatred after West Midlands Crown Prosecution Service deemed that the Islamophobic post on Facebook did not meet the ‘evidential standard’ to prove that Kitson intended to stir up religious hatred. Contrarily, if Kitson had displayed an image of a Jewish man being spit-roasted over a burning Torah, then a conviction against the former UKIP councillor would’ve been imminent as the provisions of incitement protect the Jewish community under racial hatred. Evidently, if the same standards are applied to the Scottish context, Scottish Muslims will similarly face serious gaps in the protections that they are afforded within the legislation.

Despite this, there are genuine and significant concerns about how the legislation will impact the freedom of speech across Scotland. Indeed, there are many forms of prejudice, including Islamophobia, that are yet to receive an officially recognised definition. Therefore, the bill must include robust and policy applicable definitions that are grounded within the legislation itself in order to protect vulnerable communities, whilst also securing the limits of free speech.

Islamophobia frequently manifests itself as a form of racism, but Muslims are not defined as a race, and therefore are not entitled to the protections against racially motivated hate crimes in the same way as Jewish and Sikh communities. However, just as abusive behaviours on the grounds of race can contribute to discrimination and institutional racisms that create barriers to minority participation within social, civic, economic and political life, such propagating of insulting Islamophobic hatred can have these consequences for Muslims. Therefore, the protections afforded by the bill on the grounds of race must be mirrored for Religion.

Finally, there is frequently confusion in how to record Islamophobic hate crimes, due to the ways in which Islamophobia is often racialised, leading police forces uncertain how to record hate crime against Muslims, particularly considering the aforementioned disparity in protections under racial or religious categories.

In order to create meaningful policies to tackle social issues, accurate data is essential. Therefore, MEND recommends that the bill in question specifically includes a requirement for the police to record Islamophobic hate crime as a separate category of hate crime, in order to assist in effective policy development and application.

Ultimately, it is evident that hate crime, particularly against religious minorities in Scotland, has worryingly risen. Therefore, it is of crucial importance that there is legislation which effectively protects religious communities from already rising hate crime.

MEND urges the Scottish government to: