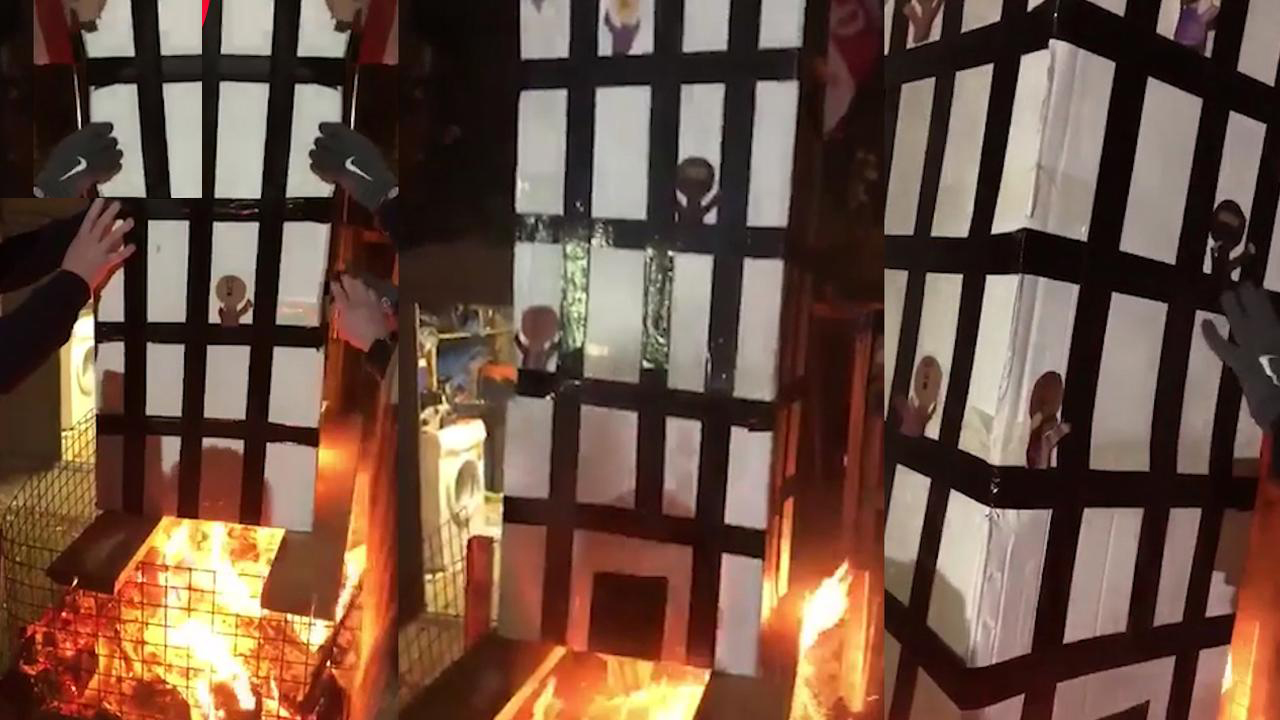 On Monday 5th November, footage shared on social media appeared to show a group burning an effigy of Grenfell Tower, with paper figures in the window, as part of Guy Fawkes night celebrations. A group of men mock the victims of the fire, singling out an image of a woman wearing a niqab for specific abuse, and clearly delight in the burning of the model over a bonfire. A group of five men were arrested on suspicion of a public order offence under section 4a of the Public Order Act 1986, which covers intentional “harassment, alarm or distress” caused via the use of “threatening, abusive or insulting” words or signs. The five individuals – most in their late 40s and early 50s – handed themselves in at a South London police station late on Monday evening, before being taken into custody.

There has been an overwhelming backlash to the footage, with cross-party condemnation. Prime Minister Theresa May called it “utterly unacceptable”, whilst Home Secretary Sajid Javid stated it was “disgusting, shameful, behaviour”. Mayor of London Sadiq Khan stated, “I utterly condemn this sickening video” and urged social media companies to remove the content from online. Condemnation also came from those directly involved in campaigns and legal inquiries into the event. Moyra Samuels, from the ‘Justice for Grenfell’ campaign group, called it “a disgusting attack on vulnerable people” and pointed to the “worrying rise of racism in this country at the moment”. Commander Stuart Cundy, who is leading the investigation into the Grenfell Tower fire, said: “I am frankly appalled by the callous nature of the video posted online. So many people lost so many loved ones, and many more have been deeply affected. To mock that disaster in such a crude way is vile”.

Whilst Britain has a long history of open debate and satire, footage which mocks murder victims clearly crosses over beyond the limits of what is acceptable. Under Article 10 of the Human Rights Act 1998, “everyone has the right to freedom of expression” in the UK. But this freedom “may be subject to formalities, conditions, restrictions or penalties as are prescribed by law and are necessary in a democratic society”, including those “in the interests of national security, territorial integrity or public safety, for the prevention of disorder or crime, for the protection of health or morals, for the protection of the reputation or rights of others, for preventing the disclosure of information received in confidence, or for maintaining the authority and impartiality of the judiciary”. Section 4 of the Public Order Act 1986, under which the persons involved in incident were charged, makes it an offence to use “threatening, abusive or insulting words or behaviour that causes, or is likely to cause, another person harassment, alarm or distress”, including language deemed to incite “racial and religious hatred” and language that “encourages terrorism”.

This event clearly flouts limits of this freedom for expression by risking public safety by directly impinging on the rights of others. Britain and other European countries have no specific legal provisions for the right to cause distress cause through speech – unlike, for instance, the way the First Amendment of the US Constitution is interpreted. Furthermore, whilst satire is defined as ‘punching upwards’ – or speaking truth to power – the burning of this effigy only sought to attack those most vulnerable, singling out still-grieving victims for abuse. Families of those who died in the fire are participating an official inquest into the event which assesses the role of failures of business corporations, national and local government in the fire, making the timing of the footage more harrowing.

The footage targets the most vulnerable – not just in Grenfell but throughout all of British society; whilst the video is targeted at Grenfell victims, it contains several clearly racist overtones. Abusive comments against the working-class poor, migrants and Muslims can clearly be heard during the film, as part of a running commentary which mocks the victims. Such language is significant because it is representative of the increasing intolerance that can be seen in some elements of British society towards a host of minority and disadvantaged communities. That the group seemed confident to film and share the event on social media (in legal terms, to publish) is particularly worrying, as it shows the confidence they had in openly airing appalling opinions. Sadly, this reflects a worrying trend in British society; a recent ComRes Poll commissioned by MEND found that 47% of the public felt that Britain was becoming less tolerant of Muslims.

MEND condemns the video unreservedly, not just because it mocks what has been termed as  the “social murder” of at least 72 people, but because it is representative of the growing confidence of racist and Islamophobic elements within society.

But condemnation, however whole-hearted or comprehensive, is not enough. We should demand action, and that the perpetrators meet the full force of the law. We owe it to the victims, the injured, and their families. Sadly this ‘full force’ in the guise of Section 4 of the Public Order Act may only be a fine, according to sentencing guidelines. In general we need to ensure stronger legislation needs to be in place to respond to such hate speech against vulnerable communities.

Such brazenly open racist behaviour does not occur in a vacuum. The rise of the far-right and the xenophobic and Islamophobic headlines in sections of the British press are the oxygen which such people rely on and these daily attacks must also be challenged. Whilst MEND is therefore supportive of the wide array of voices that immediately criticised the film, there needs to be far more light shone on why such individuals felt so confident in publicly mocking Grenfell victims, their families and vulnerable minority communities.