MEND statement on circulation of ‘Punish a Muslim day’ letter 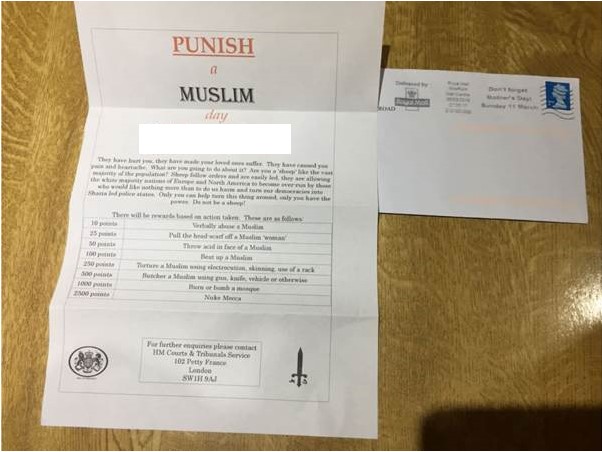 It has come to light that a number of houses in the London Borough of Waltham Forest and Bradford have allegedly received letters calling for ‘Punish a Muslim day’.

The letter in question advocates for people to carry out horrific and indiscriminate abuse against Muslims, presenting it as a game where one receives points depending on the severity of abuse. The suggestions range from throwing “acid in face of a Muslim” for 50 points and burning or bombing Mosque for 1000 points.

MEND is deeply appalled and horrified by the nature of the letter which whilst clearly originating from a disaffected section of society must be treated with every bit of seriousness as it may very well get into the hands of other like-minded people who are looking for a prompt to act.

This letter appears to be symptomatic of the rise in Islamophobia we have witnessed in recent times. It comes just days after the guilty verdict against Paul Moore for attempted murder of Zaynab Hussein who was left in a pool of blood by her attacker. We call upon the Government to take Islamophobia as seriously as other forms of hate crime.  We look forward to hearing more from the Police on their investigations into this deeply troubling letter.

MEND urges anyone who has any information on the matter to contact us – in addition to the police.

MEND calls on Imams and community leaders to advise congregations and the community not to be scared by this act and to go about their lives as usual.

If you receive this letter, please try to limit the amount of handling of the letter to preserve evidence and immediately report it to the police and MEND’s Islamophobia Response Unit (IRU) here.

The IRU can help you contact and deal with the police (if you choose to do so), and signpost you towards free legal advice and emotional support that may be available.

Reporting to the IRU is also important as it allows us to monitor levels of abuse and compile accurate data on the levels of Islamophobia.

MEND Press Release: Over 40 community organisations in Yorkshire call upon the Yorkshire County Cricket Club to investigate institutional racism within the Club