MEND Launches its Policy Pledge Manifesto Ahead of a General Election 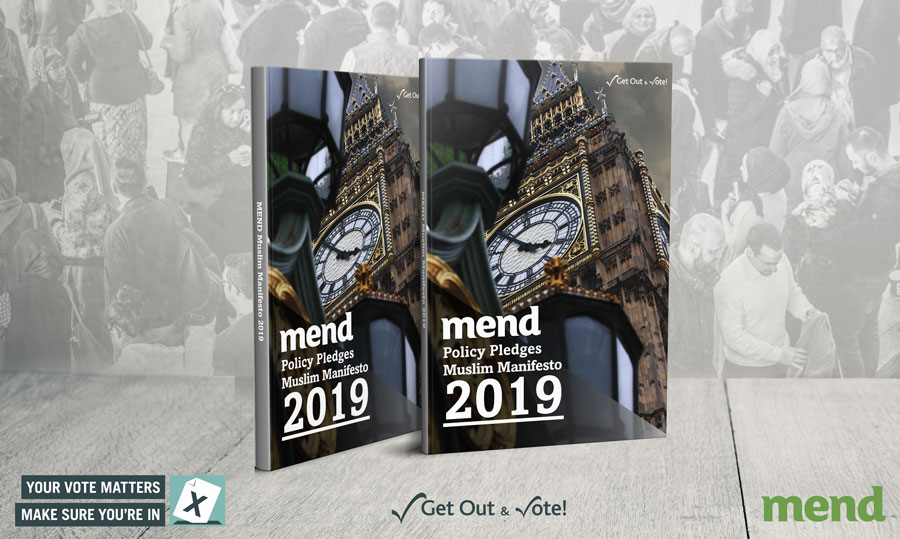 We are living in an age where politicians have described Muslim women as “bank robbers” and “letterboxes”, and where Islamophobic hate crime rose by over 40% in London alone in the year up to January 2018. In this climate of hostility towards Muslim communities, it is incumbent upon all political parties to be aware of the challenges that they face and to ensure that they are fully representing the needs and interests of all of their minority constituents.

In pursuit of this aim, MEND has published our Policy Pledge Manifesto, which represents the policy positions that resonate with Muslim communities. Indeed, MEND’s manifesto contains policy pledges that have been developed and ratified by our core network of volunteers and staff. As such, our pledges are designed to truly reflect the diversity and interests of our 700 volunteers across the country and the vast number of Muslim communities that they represent.

Historic migratory patterns have led to a concentration of Muslims in certain geographic areas of the UK, making the vote of Muslims critical in a large number of parliamentary seats. Muslim voters have been estimated to make up 10% or more of voters in 83 parliamentary seats (13% of constituencies). Certain council areas such as the London boroughs of Tower Hamlets and Newham as well as Blackburn with Darwen in the North West of England feature Muslim populations above 25%. Just under a quarter of Bradford residents are Muslim, while 22% of the population of Birmingham, the UK’s second largest city, are Muslim. Muslims living in London make up 1 in 8 of the population of the UK’s capital, exceeding 1 million. Blackburn with Darwen also contains the most concentrated area of Muslims across the whole of the UK, with the council wards of Bastwell and Shear Brow both having local Muslim populations above 75%.

Interestingly, every one of the 25 constituencies with the highest proportion of Muslim voters in the UK elected a Labour MP in the 2017 general election with a greater majority than in 2015. In 7 of the 10 seats with estimated Muslim voter numbers above 25,000, the Labour majority increased by over 10,000 between the 2015 and 2017 elections.

While causality cannot be definitively established for any seat being ‘won’ or lost’, these statistics do suggest the Muslim vote should be a crucial consideration for any political party. Moreover, while the voting pattern of any minority community cannot be seen as homogenous, there is evidence to suggest that Muslim communities have an overwhelming tendency to vote Labour.

Therefore, with the likelihood of this being closely fought election, it is in their own interests for political parties to critically engage with, and reflect the concerns of, Muslim communities.