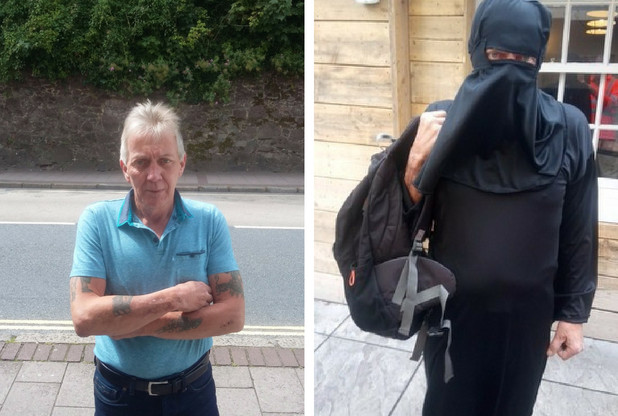 57-year-old, Thomas Dunn, from Exeter is on a mission to get the “burqa” banned by changing into the attire in public places, reports Devon Live.

The “activist” carries out his one-man campaign by putting on an abaya (long loose fitting dress) and niqab (face veil) in shops.

His most recent stunt saw him stopped by police under section 43 of the Terrorism Act, after he changed in Debenhams and reportedly started imitating the Muslim prayer “loudly.”

He was released without charge.

Dunn said he targeted Debenhams this weekend after the chain announced it was selling clothing for Muslims.

(This announcement was made in February and the clothing will only be sold in one of Debenhams’ London branches.)

He stated “I have always been a little intimidated by people wearing burqas and since all the terrorist attacks I think the government should ban anyone from covering their faces as on CCTV it won’t pick up who they are.

“If you see someone wearing a burqa you immediately think terrorist. It should be stopped. I have nothing against Muslim people and I’m not racist in any way, but I don’t agree with people covering their faces.

“When you change into a burqa you really can see that the way people look at you changes. You see that initial fear in their eyes.”

This is not the first time someone has protested in a “burqa” in Exeter. During the EDL’s 2013 march through the city these photos were taken of demonstrators dressed in the traditional attire.

In one photo the men can be seen bowing in prostration.

Posted by Exeposé on Saturday, 16 November 2013

Posted by Exeposé on Saturday, 16 November 2013

As Kirsty Strickland points out in her article for the Independent, “the public are more at risk from white men than Muslim women.

“The idea that restricting the freedom of Muslim women will keep us safe is illogical.”

Moreover, Dunn’s choice of Debenhams for his protest due to its partnership with a Muslim fashion retailer demonstrates that his objection is to Muslim women’s clothing generally and not just the “burqa.”