Home » News » Fear-mongering around refugees to distract from COVID failings

Fear-mongering around refugees to distract from COVID failings 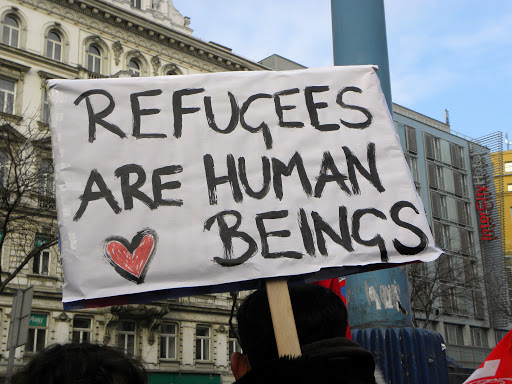 Parallel to the revelation of Home Secretary Priti Patel’s (now thankfully disrupted) plans to send royal navy warships to block asylum seekers from crossing the Channel, the leader of the Brexit Party, Nigel Farage, has spent the last few weeks tweeting videos and posts expressing outrage at a supposed invasion of “illegal migrants” from his official account.

In one such tweet, Mr Farage shared a video showing what appeared to be a group of refugees – which included children – getting out of a boat somewhere on the Kent Coast, and called it a “shocking invasion”.

Creating a moral panic like this, whereby a situation is blown out of proportion and positioned as a threat to society, is a mechanism used to distract the public and deflect the blame for the current COVID crisis away from the failings of the Government and wider socio-economic disparities and entrenched inequalities, and redirect public anger towards BAME, Muslim, and vulnerable communities in the form of xenophobia.

Moral panics, if allowed to take hold of the public consciousness, can lead to scapegoated communities being “othered” and excluded from wider society, leaving them vulnerable to mistreatment, discrimination, and abuse as a result. Stanley Cohen, the academic who has observed the phenomenon of a moral defines it as a process within which:

“A condition, episode, person or group of persons emerges to become defined as a threat to societal values and interests.”

Cohen proposed that there are five stages of moral panic:

When speaking about Refugees and Asylum Seekers in the context of moral panics, Cohen noted:

“Three dominant metaphors portray asylum seekers as water (‘tidal waves’), as criminals or as an invading army. The repetition of these themes…shows them as the ‘natural’ way of describing the situation. The ‘naturalization’ of particular metaphors can blur the boundaries between the literal and the non-literal.”

Taking Cohen’s observations together in the context of Mr Farage’s tirade against refugees, it is clear to see that the latter has used his social media platform and tried to posit the presence of refugees as a grave threat to the UK, and has deployed the language of them as an invading army in such a manner as to portray them as a literal threat to society.

It is important to remember that xenophobia is the fear of foreigners. However, to be foreign is not necessarily limited to those outside of the country or state’s borders. Rather, to be foreign is anything or anyone outside of the dominant group norms. Therefore, anyone who falls outside of the dominant identity is thus subsumed within the notion of foreignness. For those espousing xenophobic narratives, this includes British citizens that possess minority cultural, religious, or ethnic identities – hence, the frequent abuse of BAME, Muslim, and other minority communities.

Meanwhile, when considered alongside other media narratives about COVID19 which are also frequently loaded with racist undertones, Farage’s rhetoric contributes to an overarching narrative that the real threat is emanating from the external and foreign “Other” – the “invaders” seemingly illegally and unfairly taking our resources at a time of national crisis, and the BAME and Muslim communities allegedly “just not taking the pandemic seriously”, as by Craig Whittaker, the Conservative MP for Calder Valley in West Yorkshire.

The racist discourse surrounding lockdowns in Leicester and Manchester is an example of the realities of the current pandemic being distorted, and minority communities being scapegoated. The comments mentioned previously by Craig Whittaker came despite recent times having seen:

Meanwhile, contrary to Mr Whittaker’s claims, health officials have recently revealed that in areas such as Trafford it is, in fact, younger middle-class residents who are at the centre of recent rises in cases, with 80% of new infections over the week of the study being found amongst white communities.

Therefore, it is imperative that when it comes to addressing any transgressions of the law and government guidelines, there must be consistency in the way every segment of society is held to account. Doing so is essential for developing accurate understandings of what the challenges facing society are and how best to address them.

Allowing political and media commentators to sew divisiveness into our understandings and distract from the real challenges will only serve to divide communities and scapegoat those who are already amongst the most vulnerable to the suffering caused by the pandemic.

MEND recently joined with 84 other civic actors from around the world to protect the rights of stateless individuals. The joint statement which MEND was a signatory to can be found here. There is a pressing need for solidarity, particularly in these testing times, and for political and media commentators to show maturity and leadership, particularly when it comes to demonstrating our own values and humanity in protecting those in society who are most vulnerable.