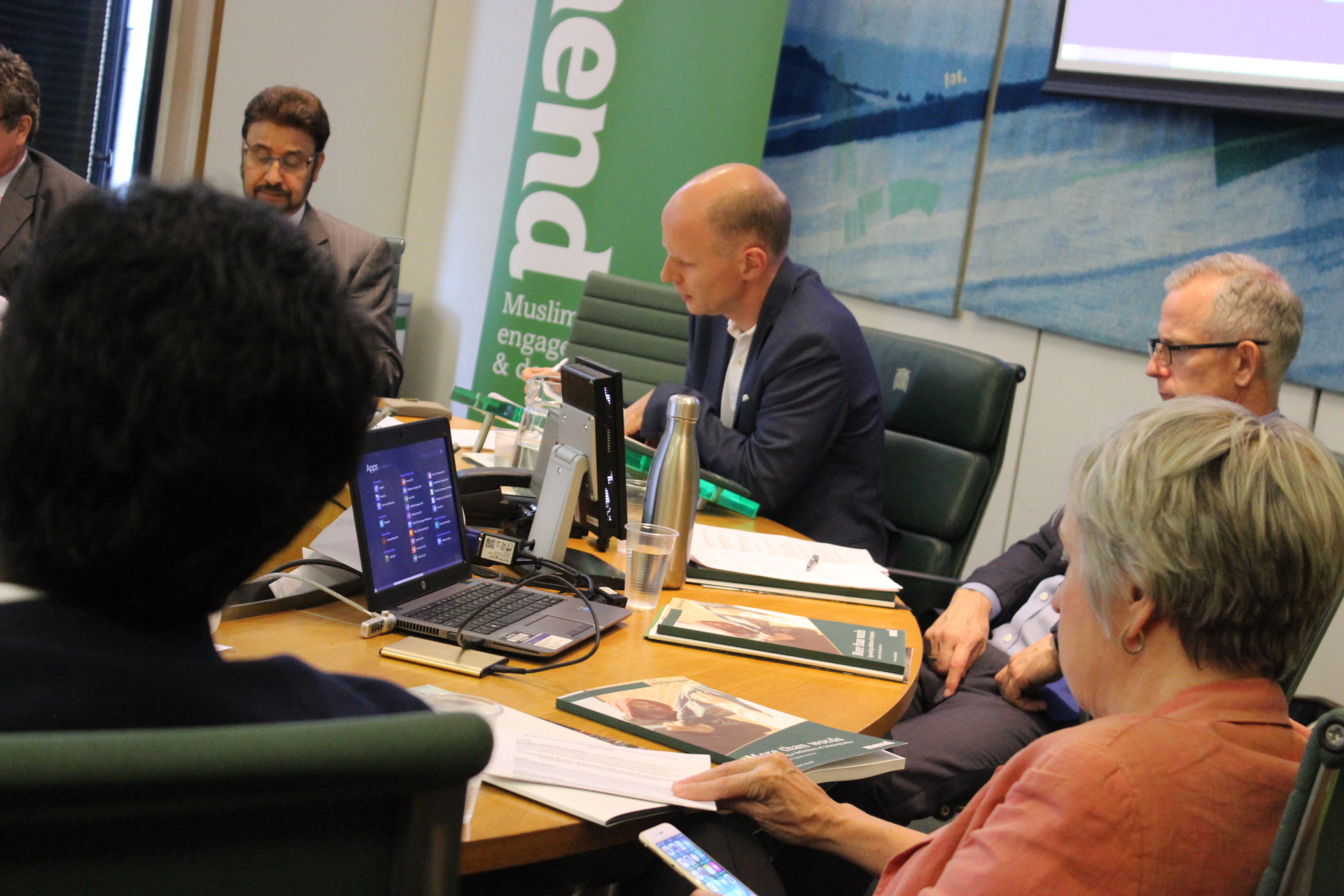 Last night, MPs, Peers, NGOs, and community leaders celebrated the launch of MEND’s report, “More than Words: Approaching a definition of Islamophobia” at a Parliamentary event.

The All-Party Parliamentary Group (APPG) for British Muslims recently launched an inquiry into a working definition of Islamophobia. In line with MEND’s submission to this inquiry, MEND released their comprehensive report as an exploration of the roots and causes of Islamophobia, how and why it is fuelled, and its socio-political and personal consequences.

It is our hope that the discussions contained in this report and the expert analysis of contributors such as Professor Tariq Modood, Nazir Afzal OBE, Dr Todd Green, and Professor Nasar Meer, Dr Lasse Thomassen, Dr Aurelien Mondon, Dr Aaron Winter, Professor Sophie Gilliat-Ray and many other leading figures in this field, will advance conceptual understandings of Islamophobia that will assist policymakers in approaching an all-encompassing working definition of Islamophobia.

While a full working definition can be found in the report itself, MEND’s definition of Islamophobia can be roughly split into two parts:

The reasoning behind this definition is to ensure a holistic understanding of Islamophobia, so that it is not just seen as hate crime and abuse, but also recognised in the ways that it works to exclude Muslims from all realms of civic life, whether that be through workplace discrimination, or through institutional Islamophobias that discourage Muslim voices from participating in democratic debates.

However, MEND’s report is not intended to force our definition into political understanding, rather, it aims to assist the APPG by encouraging a full and holistic understanding of the phenomenon, which in turn presents effective methods for approaching and challenging it.

Speaking at the event, Lord Paddick noted that “As far as I’m concerned the words “Islam” and “terrorism” are a contradiction in terms”.  He added that “Muslim communities are more peaceful, more law-abiding, more charitable and more welcoming than much of secular Britain”. Regarding the report itself, Paddick concluded that “Almost every recommendation contained in this report would fit seamlessly into a liberal democrat manifesto”.

Similarly, commending MEND’s work and this new report, Afzal Khan MP stated that, “I hope MEND will be giving evidence soon to the APPG on British Muslims”.

Speaking about the relationship between the Conservative Party and British Muslims, Peter Oborne argued that “Despite mounting evidence of Islamophobia, the Tory party won’t accept and won’t admit there is a problem”.

Meanwhile, Baroness Hussein-Ece showed concern for Islamophobia at all levels of Government arguing that, “Tommy Robinson has been the guest of the UKIP peer [Malcolm Pearson] many times” and “When we complained, we were told there’s not much we can do unless he does something wrong because he is a guest of the peer”.

Javid Rana, Chair of the Association of Muslim Police, spoke about the need for the police to better represent the Muslim community by recruiting and retaining Muslim officers and staff so they “look and feel like the community [they] serve”.

While unable to attend the event in person, Lord Jeremy Purvis sent a statement describing MEND’s definition of Islamophobia as “nuanced and provides much needed clarity to the calls for the Government to adopt a working definition of Islamophobia… I hope that many of you will be able to take advantage of MEND’s report to facilitate policies designed to eliminate discrimination and Islamophobia from aspects of public and civil life, such as in education, business and politics.”

CEO of MEND, Dr Shazad Amin, commented that, “As this report shows, Islamophobia is much more than abuse and harassment. It extends to workplace discrimination, media Islamophobia, online hate speech, and the exclusion of representative Muslim voices in democratic debates. The ultimate result of Islamophobia is to deny Muslims the opportunities to play their full part in political and civic life.”

The full report can be found here and the executive summary can be read here.